Dovel Technologies is buying Zapthink. It is the first time I read about Dovel.

Unlike Dovel, Zapthink is well known to me. As a SOA expert, I read Zapthink's analysis of SOA and other Architectural topics as well as short articles named ZapFlash.


The challenges facing small Analysts and Consultants are incomparable to challenges facing a lot larger company.
Like small software vendors many of the small Consulting and/or Market Analysis companies will not survive.


The acquisition
Dovel perspective of the acquisition emphasizes the strengthening of its SOA expertise to its USA based governmental clients.


Jason Bloomberg's view is that the acquisition is part of Dovel's strategic plan to expand their scope, Capabilities and thought leadership in Service Oriented Architecture, Cloud Computing and related technologies as well as an opportunity to add new people to the Zapthink team three of them will be regular contributors to the ZapFlash newsletter.


Ronald Schmelzer will serve as Zapthink's consultant for few months and afterwards will be moving on. His perspective is the most interesting because he was a founder of Zapthink, because he is moving on and because he already sold ChannelWave, a Boston based software company.

According to citybizlist's Brian Wolak "Schmelzer is convinced that small businesses are going to dominate the landscape in the years to come, with a combination of former unemployed workers linking up with small businesses, a general backlash against big corporations, and the government's emphasis on kick-starting the economy through startups and innovation."

The success of a small consulting company highly depends upon key people.
As far as Zapthink is concerned there are two key figures: Schmelzer and Bloomberg, so Schmelzer departure is a huge challenge. It is not easy to add or replace key figures in a small company. In case of too much success a company challenge is how to handle the large volume of tasks, while preserving the quality of deliverables. On 2007 David Linthicum joined Zapthink and was a contributor to the ZapFlash, but after a short period of time he was no longer a contributor to Zapthink efforts.


Evangelists or Thought Leaders are a must for new paradigm or a revolutionary technology not for a mature paradigm.
When the paradigm, architecture or technology is matured the number of experts who understand it or experienced it is growing and it is less a matter of Thought Leading and more a matter of actually deploying it. SOA is now Mainstream and mature.


Dovel is a company which helps governmental agencies in USA to deploy SOA as well as other paradigms and not a Thought Leader. The new Zapthink's focus will probably be SOA implementations.


New Technologies and Paradigms time overlap with older paradigms is the reason.  A Thought Leader in a relatively old paradigm is too busy in assignments related to this paradigm and therefore is lagging behind new fresh Thought Leaders of the new paradigm.


This phenomenon is depicted in the simplified illustration beyond this line. 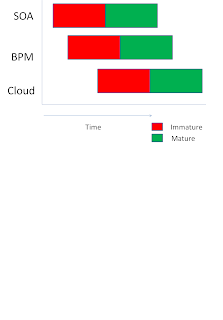 The illustration depicts three related paradigms, which are not exactly comparable to each other. SOA is essentially an Enterprise Architecture. BPM is a Business Technology and Cloud Computing is more Operational approach. Cloud Computing is a general term including a variety of technologies and concepts, in different Maturity levels


There are many talented people, so other talented people explore the new technologies or paradigms before SOA became a mature technology and the SOA experts, saturated with many SOA related tasks, do not have the time to dive deeply into BPM or Cloud Computing.

Finally, the SOA Thought Leader have no other choice when the demand is for Cloud Computing thought leaderships, while the SOA demand is more for practical day to day skills: Architects, System Analysts and Developers etc.


But it may be too late for the SOA Thought Leader to replicate his  success: other people who started earlier in Cloud Computing are positioned better.


The challenge described in the last section face small companies such as Zapthink, as far as large consulting companies are concerned they can allocate enough resources: some potential Thought Leaders could  specialize in the new paradigm (e.g. Cloud Computing), while others take care of a previous buzz such as SOA.