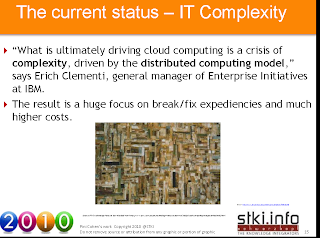 Complexity was one of the issues presented by Dr. Jimmy Schwarzkopf's STKI summit Keynote presentation.
My Take in a previous post glanced at Complexity and the topic of a comment to my post was Complexity.

Pini Cohen's Architecture and Infrastructure EVP & Senior Analyst's presentation in the STKI Summit included many slides on the same topic.
The key point was that In Israel  2009 was a year with record downtime dew to Complexity.
Storage was a major cause for not good enough service due to under staffing.
According to Pini's presentation the complexity is driven by three factors:
1.    The total number of entities
2.    Their degree of heterogeneity
3.    Their degree of interconnectedness

The solutions to the Complexity problem according to Pini's presentation are:
1.    Industry in a Box is Consolidation which reduces the total number of entities and could also reduce the degree of heterogeneity.
2.    Automation e.g. by using Business Ready Infrastructure and CMDB driven processes.
3.    Cloud Computing by reducing the total number of entities and by providing Elasticity, Horizontal Scalability, Resources sharing etc.
4.    Other methods for reducing Complexity especially Service Oriented Infrastructure (SOI). 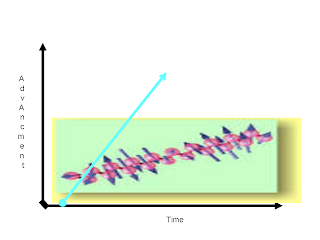 My conclusion is that Cloud Computing is a trade off, which reduces some Complexities and enhances other Complexities. The overall effect will be Enterprise dependent: for some enterprises External Cloud may significantly reduce Complexity and for others it will increase Complexity.