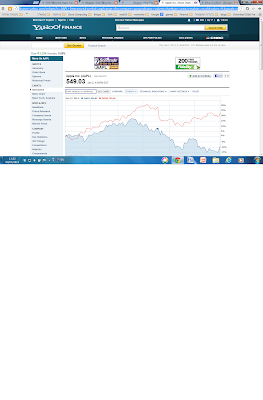 
Vendors Survival: Will Apple Survive until 2021?.

Many people thought that the question I asked is irrelevant: Apple was never more successful. Not everyone of them is so sure today.

Apple's position was changed. The graph above derived from Yahoo! Finance page depicts the change: Apple's stock is going down in the last 6 months.

I could use a three months graph instead of a 6 months graph, which could show more dramatic change, but I thought that it is not correct to use so short term graph.

What was changed since 2011?
Apple is less successful than before. It looks like the company lost Mind Share: it is not so cool and is no longer perceived as the innovative company.
"Sic transit gloria mundi" is a Latin proverb saying that glory will not last for ever.

Bottom Line
Extrapolation of the current negative trend  as indicator of Apple's future could be wrong. As I already mentioned in my 2011 post, Apple is a Mountains Train: it may resolve its current challenges and grow or it may not.