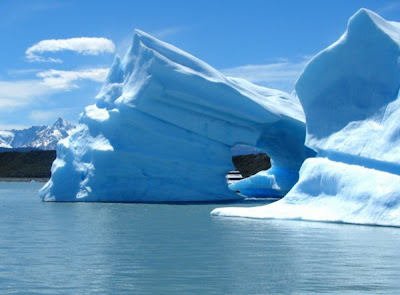 The analogy between an iceberg and IT domains is a common analogy.

It describes an IT domain in which a little part is visible (above the water) and a bigger part is hidden (under the water).

This analogy may be useful for describing Enterprise Data.

Databases are clearly visible. Some Directories or Libraries as well as some stand alone disk files are also visible. The part behind the water mark is usually unstructured data, such as Web Pages, e-mail messages and attachments.

The Iceberg analogy was also used by SOA Software's CTO Brent Carlson for describing SOA: The actual projects are above the water, but more abstract architectural levels could be ignored because they are not visible.

This analogy came to my mind while reading an interesting Oracle White Paper titled:

The White Paper included an article by Oralce's BPM specialist John Wylie describing Unformalized Collaborative Processes, which are not yet handled by traditional BPM tools. An example of Collaborative Process is a process including unformulated e-mail based activities, i.e. a Knowledge Worker is sending an e-mail message to another Knowledge Worker or workers as unformulated part of the process.

It should be noted that a major issue in implementing BPM is limited Visibility of these automated processes. In many cases these processes are not documented and it is difficult to find which applications are participating in the process, which departments perform tasks or sub processes included in that processes and which roles are participating in that processes. Therefore we may conclude that some of the automated processes are included in the hidden part of the iceberg.

President & Co-founder as 20% of cases usually consume 80% of resources.

I also referred to Human Processes complexities in a previous post titled BPEL for the People.

iceberg below the water mark.

3.Finally, The lower part of the processes iceberg is composed of the unstructured and undocumented

I received the following comment in Linkedin Integration Consortium group from VP, Global Integration Services at Informatica:
the iceberg analogy is indeed common. So the question is "so what?"

John, thanks for your comment.
The iceberg analogy is common but also useful.
If you are not aware that what you see is only the upper part of the iceberg, you will ignore the parts under the water line. Some enterprises I know ignore abstract SOA layers and fail in their SOA initiatives. The same is true for enterprises ignoring less visible business processes types in their BPM initiatives.