Vendors Survival: Will EMC Survive until 2018? 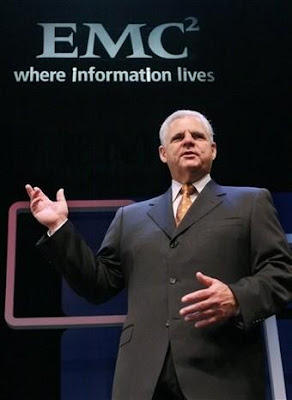 This post is another post in the Vendors Survival series following posts on Microsoft, Google, HP and Sun.


I do not think these two hypotheses will be realized. I do think that EMC management team will not make these two mistakes in 2009, if the company would like to survive until 2018.

Why EMC should not sell Vmware?

Jason Hiner wrote "EMC, the world’s leading storage vendor, is flush with cash and has the opportunity to make a big move". If a company has a big amount of cash, it should have a good reason for selling a company it owns.

It should be remembered that Virtualization is a growing market, so the probability of higher Vmware revenues is high.
It should also be remembered that EMC strategy was based on changing from a storage hardware only vendor to a vendor with software portfolio. As a result of that strategy it acquired companies such as Documentum, RSA, Legato and Vmware.
My conclusion is that EMC is not going to kill the golden egged chicken Vmware and will not sell it in 2009 to Cisco or any other company.


Why EMC should not buy Dell?

Jason Hiner wrote about merging of the two companies and compares it to HP-Compaq merge. However, HP headed by Carly Fiorina acquired Compaq and did not merge with Compaq; same as if the scenario of merging between EMC and Dell will take place it will not be a merge but acquisition of financially weaker company (Dell) by the company having much more cash (EMC).


It is true that many years ago EMC acquired Data General which produced servers for proprietary Operating System (AOS/VS) as well as UNIX servers, but EMC acquired it only because of the midrange storage line and did not compete in the server market utilizing DG UNIX servers.
Acquiring Dell is a different story. It does not have a leading storage product line for SMBs and it is bigger than DG, therefore its acquisition will be more complex, will require allocation of more resources and time for completing a merge.


Will it enter into new crowded markets (Servers and PCs) during a Recession? I doubt EMC will try to enter to these markets which are not growing fast in such an unstable period.
As a company which is focused on the High-End market, the PCs division could be a difficult challenge. Some of the potential clients will be little Computers shops and many of the customers will be home users.
Should it kill Dell's PC division after an acquisition? Probably not, Dell is a leading vendor in that market.
Will it buy Dell and look afterwards for a Chinese or Indian company which will buy the PC business line? There is no good answer to these questions.
EMC could continue its partnership with Dell but it would not and should not buy Dell.

What should EMC do in order to survive?
The key for EMC's survival until 2018 is keeping its position as a leader in the Storage market. However, the storage market is changing and storage vendors should innovate in order to keep their current position or even improve it.

Storage solutions should be adapted to a more distributed environment with a varied data types and formats including less structured data than typical data stored in traditional Relational Databases. Sometimes the data is distributed in a Grid and in many cases it there is a Web based data.
EMC could use its cash for acquiring innovative storage companies (HIV acquisition by IBM is an example of such an acquisition). It also may acquire software companies, especially software products for information management.

Are the days of the High End market disks over?
The answer is definitely not. Large enterprises storage is growing in high rates (about 20% a year) and some of midsize enterprises growth rate is even higher.
Cloud Computing market growth rate is very high. Clouds will utilize High End disks.
This statement could be related to EMC's directions. I would not be surprised at all; if instead of buying Dell as suggested by Jason Hiner, EMC cash will be used for investments in the Cloud. Recently EMC formed a Cloud Infrastructure and Services Division and hired a former Microsoft executive to lead it.

It is obvious that EMC will aim at the Storage for Clouds market segment. For that purpose its traditional storage devices should be adapted to the characteristics of that market. However, the new division's name includes also the term services.
My hypothesis is that the company may also consider providing Cloud Computing services same as Amazon, Google, IBM, Microsoft and other companies are doing.

In that case one of the smaller Cloud Computing providers could be a target acquisition for EMC.
Virtualization is a must in a Cloud (External Cloud as well as Internal Cloud).

What kind of specialized Cloud services would EMC provide, if any?
The following answer is a guess or a speculation. Probably my guess as a SOA expert and not a Storage expert (although I have some experience in evaluating, selecting and properly utilizing Storage in a Data center) is not better than other people's guesses. Anyway, I think of the following types of Cloud Computing services EMC may provide:

Data Synchronization may be achieved by improved techniques of near parallel write operations in the and the Cloud executed transparently by the Storage Servers or Controllers.
It should be noted that a capability of that kind for a reasonable cost could provide a solution to the synchronization challenge.
This service could be based on Documentum software which is included in EMC's portfolio. Its RSA products line could used for protecting the content from unauthorized access.