Do we need a Consumer Operating System? 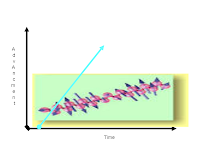 In a keynote presentation many years ago I presented a Spiral model of IT Advancement or IT Evolution described in the illustration above.
Instead of advancing like more mature industries as described in the blue line, IT evolves in a spiral way: Going to one direction and afterwards to the opposite direction. As shown in the illustration IT advances on time axis, but due to the spiral pattern it evolves more slowly.

Recently Gartner Group's analysts Michael Silver and Neil MacDonald claimed that Windows will collapse if Microsoft will not change drastically the way it builds this Operating System. According to the analysts the operating system is too complex due to accumulation of code since old times Windows. The result is growing difficulty to maintain the code, which eventually will cause collapse of the operation system, unless Microsoft will shift its Operating Systems upgrades paradigm.

My personal experience indicates that Vista Operating System is less reliable and a lot more difficult to manage than Windows XP (see previous posts Zen and the Art of MS Office Problem Determination and Microsoft Data Protection: Hone and Mobile Users Excluded ) . It should be noticed that the XP edition I used was the Professional and the edition is Home Premium. Some people may argue that it is not which is less secure and less reliable it is the home edition of both operating systems, which is less secured and less reliable than the corresponding professional edition.

It may be true, but that raises another question: Do we need a home consumer operating system at all? In my opinion we don't (at least not a complex one).
According to the Spiral Model of IT evolution we should return back to the ideas of the Network Computer (NC) advocated by Larry Ellison and Scott McNealy in the 1990th, but in an improved and more mature way. Microsoft should deploy NC like or Terminal Server like model for the Consumer operating system, by returning to the separation between two lines of Operating Systems as deployed on the 1990th but in a different way (again the Spiral Model): This time one line for Consumers and another line for Enterprises. The Consumer Operating System Reliability and Security should at list be equal to theses features for the Enterprise users.

The model of Home Consumers computing in the age of Web 2.0, SOA Mashups and beyond should be based upon the following ideas:
It should be noticed that similar Enterprise Architecture change from Client based application centric deployment to Server based application centric deployment was performed by many enterprises.
The advantage of the consumer computing model briefly described here is hiding complex maintenance processes from consumers. Most home users are not skilled enough for proper maintaining their current complex Operating Systems. These systems should become a lot less complex or maintained by experts. There is no need for duplicate installations and maintenance of the same software on many home PCs located at the same apartment.

Most electricity consumers do not posses self-maintained home placed generators or telephone exchange equipment. The local servers' operating systems should also be less complex and very reliable as well because they are not located within the enterprise boundaries.