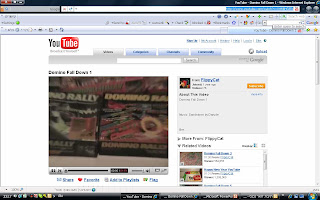 This post is based on my presentation on Web 2.0. It is a continuation to Part 1: WOA, posted few days ago.

For tasting Web 2.0 I am presenting four videos appearing in YouTube a Web 2.0 site for videos
I choose deliberately a video on collapsing (Domino Fall Down) by search engine available in YouTube. The reason for my choice will be discovered in the next post of my Web 2.0 for Dummies posts to be appeared shortly.


The Domino Fall Down Video slide shows a typical YouTube screen including:
• The video was created by FlippyCat, probably an amateur and not a media expert.
• Statistical information about FlippyCat
• Options for the viewer e.g. adding to PlayList, downloading etc.
• Flagging option in case of improper content or a content violating Copyrights. Flag is an alert for YouTube to delete the content.
Flagging option illustrates a problem of partial content control by Web 2.0 projects. The YouTube's community's help is needed for discovering improper content.
A recent example of an improper content is a video posted by a high school student in which he was shooting with a gun and declaring that he is going to kill his school teacher.

The YouTube site could be perceived as a stage for every amateur to create multimedia content. It could be compared to a “Star was Born” style TV programs. The participants in these programs are non professionals performing publicly. The differences: internet communities are larger than TV audience and the content is accessible anytime 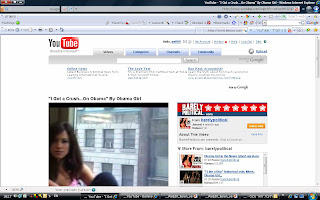 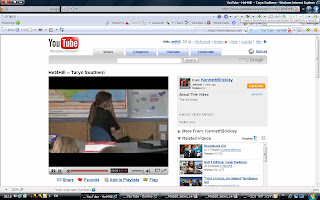 The second video (in the left side) does not look like an amateur uploading content for a community.It looks like a political initiative by Obama's headquarters and not an innocent supporter publishing her political view. It is not the only political video. The right side video includes the URL for Hillary Clinton’s response to Obama Girl song. Videos of politician presenting their views are available in YouTube as well. The point is that politicians think that YouTube is a valid channel for persuading voters to support them. For the younger generation the Web may be the most effective channel. 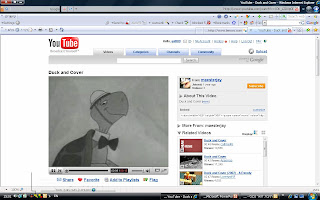 The forth video is neither an amateur post and nor a political post.
This is one of a group of real training films (black and white) during World War II.
The purpose of these films was to explain to people how to protect themselves against the unknown atomic bomb. Ridiculously, the protection method was “duck and cover”. We should remember that no atomic bomb was yet available. This specific film was designed for children.
This is an example of a video post that may have historical value.

Email ThisBlogThis!Share to TwitterShare to FacebookShare to Pinterest
Labels: Web 2.0